Information
Thermal Management of Electronics: Active vs Passive Cooling
Have you ever been hard at work on your laptop when the cooling fan powers on? Suddenly it sounds like a small airplane is taking off on the table in front of you. Have you ever accidentally touched a hot light bulb and ended up with burned fingers?
In both examples, engineers created innovative tools to manage the thermal energy created by these heat-generating systems. We'll cover the basics of electronics cooling and review modern thermal management systems that we often take for granted.
Passive Cooling in Electronics

Active cooling requires the use of energy specifically dedicated to cooling the component.

One modern example of these two cooling categories of cooling is in heat sink and heat spreader design, both of which utilize fundamental heat transfer principles.

Heat sinks are one of the most simple and common thermal management accessories. These components effectively move thermal energy away from a heat source, throughout a thermally conductive material, and into the ambient environment. Most heat sink applications are passive, utilizing natural heat transfer fundamentals.

In the image above, note that the heat sink's top horizontal plane features four through-holes. If the heat sink needs additional thermal cooling capability, you can use these four holes to mount a cooling fan. Adding a properly sized fan to this heat sink will force air across the component and allow for greater thermal transfer. Think of it like cooling down a hot cup of tea by blowing on it.

Other common forms of thermal management in modern electronics include heat pipes and vapor chambers. You can find these thermal management components in personal computers, tablets, and other computing-intensive devices where space is limited and heat-generation is significant.

Heat pipes and vapor chambers utilize a sealed evaporation and condensation cycle, which requires no secondary energy and is considered a passive cooling technology. For more information, be sure to learn more about the fundamentals of heat pipe design.

In the image below, you can see a series of six heat pipes that move energy away from a CPU heat spreader to a horizontal-finned heat sink.

Lastly, thermal grease is extremely common in both active and passive cooling designs.

Thermal grease technology acts as a thermal interface between solid heat transfer accessories.  Its most common application is between an IC's heat spreader and the heat sink that is cooling the chip. In the image below, you can see thermal grease is applied directly onto a chip package. Next, a heat sink or vapor chamber will be placed on top of the grease. 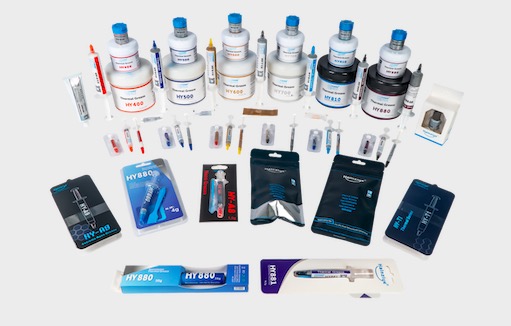